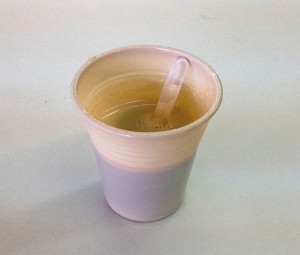 While I’m in Salvador, I’d like to do a few posts on the language that I’m hearing and the things that I’m picking up on during my second trip to Brasil. And one thing that I’ve been hearing everywhere is people using the present tense for things they’re actually going to do in the near future. Like this:

My colleague dropped his pen the other day; as I reached down to get it for him he said:

(Deixa que…, by the way, is a neat way to say “Don’t worry/Don’t bother, because…” that I learned recently. Reminds me of other deixar expressions like Pode deixar – “Relax/Don’t worry”, Deixa pra lá – “Never mind/don’t bother”)

Statements like these are what John Whitlam calls “spontaneous statements about this future”. And the rule of thumb is: If you are just about to do something, use the present tense.

Before I give the next example, I have to offer some background. One of my favorite things about Brazil is that coffee is normally served in cute 4-oz cups with little spoons, rather than in obscene venti-sized swimming pools. Even the name is cute – um cafezinho – and it’s exactly the amount of coffee that I like to drink in one sitting.

Well, since arriving in Salvador I have noticed that some offices have these…machines…in the break room. They are sort of like Keurigs – or at least the lumbering, watercooler-sized ancestor of the Keurig – that serve you the perfect cafezinho, customized to your liking. You press a button to select your beverage of choice, setting in motion a whole rube-goldberg-like chain of events that begins with a tiny plastic cup dropping into place, a precise dosage of sugar falling into the cup, followed by coffee, milk, and (if desired) a bit of milk foam. The final, perfect touch is the precious little plastic stirrer that drops into the cup moments before you slide open the door to retrieve the finished product. The whole process takes about 15 seconds, while you stand there thinking Vem pra mim, meu cafezinho. Apressa-se, meu cafezinho.

The café? Strong. Bitter. The leite? Not leite exactly, but somehow richer and creamier.

In short, everything about this machine is perfect and wonderful and delicious, completely unlike the crude “cappucino”-squirting machines in American cafeterias, or the bland conformity of the Keurig with its wasteful overpriced cartridges. I don’t know the real name for these machines, but I’ve started calling them “máquinas de cafezinho” and they are my new favorite thing about Brazil.

But back to my language observation. The first time I tried to use one of these máquinas de cafezinho, I was very confused, because there is a whole complicated menu of buttons that you push to select the drink you want, with special options for extra sugar, no sugar, milk, no milk, etc. As I stood in front of the machine, trying to figure it all out, my colleague said:

Te mostro como funciona. (I’ll show you how it works)

My mind wandered away from cafezinhos just long enough to think, Huh, again with the present tense.

If it had been me, I probably would have said something like Vou mostrar pra você como funciona. My normal inclination is to use vou in all of these situations, because in English you usually say “I will” do such and such. I’ll call you tonight. I’ll be right back. I’ll answer it! But as usual, Brazilians prefer economy of words. As this colloquial usage has begun to soak into my brain, I’m finding all kinds of excuses to try it out. It feels simpler and more natural, now that I have an ear for it. When the waiter at the hotel restaurant asked me if I wanted to put my meal on my room account, I simply said

And when I needed to leave a meeting for a few minutes, I said

Volto em breve. (I’ll be back in a moment)

You could also say Já vou for that one. Now that I understand this facet of the language, I suddenly realize why so many Portuguese/Spanish speakers say things like “I show you” or “I call you later” in English.

And actually, English speakers do something similar when we say things like:

Now that I think about it, we use the present progressive for things in the future all the time:

I’m flying to Brazil in January. (Instead of “I will fly”)

We’re having the meeting as soon as they confirm the schedule.

He moves out next week.

Which makes it confusing, because you absolutely cannot use the present progressive in Portuguese in the same way. You could never say

The present progressive is only for things that are happening right at this moment. Instead you use the regular old present:

In his book Modern Portuguese Grammar, John Whitlam brings up another point about expressing future actions.

He points out that the present simple is often used to describe when scheduled events are going to occur:

A avião decola à meia-noite. (The plane takes off at midnight)

It’s also used for statements about the future that arise spontaneously, like those I mentioned at the beginning:

Whereas the ir + infinitive form is more often used for intentional, premeditated actions (things that someone has been planning in advance):

Eu vou dar pra ela todo o dinheiro. (I’m going to give her all the money)

I’m guessing that many English speakers overuse the ir form because of the prevalence of “going to” in English, even for things we are “going to do” right now. One of my goals is to use it only when necessary and start using the simple present more often in everyday conversation…I’m hoping this will help me sound a little more natural and Brazilian!

This entry was posted in Grammar, Lessons. Bookmark the permalink.