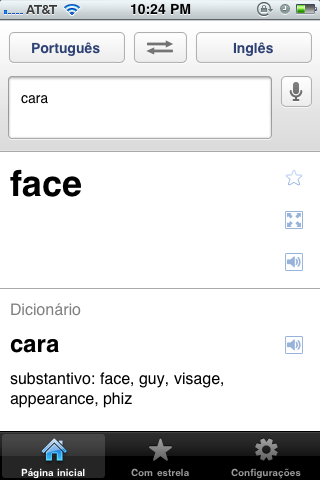 While lacking the nuance of a good dictionary, Google Translate has gotten pretty good for Portuguese – English translations. It uses a type of translation called statistical machine translation, where instead of teaching a computer the grammar rules and vocabulary of the language, you feed it a massive database of documents that have been translated by humans, and let the computer figure out the grammar and vocabulary for itself by looking at statistical associations between translated words.

This means that it is very good at some tasks, like choosing the most appropriate translation of a word or phrase based on its context. But it is also terrible at other tasks, like knowing when to use the Portuguese subjunctive. The translations are generally the most accurate going from Portuguese to English, but going from English to Portuguese leads to a lot of errors. It does have some great uses for those learning portuguese, however. Here are just a few:

Use it as a dictionary

When just a single word is entered in the text box, Google will return a dictionary-like list of all known definitions. This is useful when you have an unknown word and want to get a sense of the entire range of meaning of that word.  The thing to remember is that if it’s a noun, you must put it in the singular form. Adjectives must be in the masculine singular form. And verbs must be in the infinitive.

Lookup a word in context

Even more powerfully, if you provide a word in the context of a phrase or sentence, Google will select the most context-sensitive definition.

For example, if you type in the noun cara, you will see that it means “face”, “visage”, “appearance”, but also “guy”. Now let’s provide more context. Type in lavei a cara and it will translate as “I washed my face”. But type aquele cara alto and it will translate to “that tall guy”. The more context you can give Google, the better your translation will be. Google even recognizes when words are used idiomatically – sometimes. Type in cara de pau, and instead of the literal “wooden-faced” you will get the idiomatic meaning: “chutzpah”!

Note: There is now a website that I think is even better for contextual translations: Linguee.com. When I need to look up a word or phrase online, I use either Google Translate for a quick scan of possible meanings, Linguee to see how the word is used in context, or infopedia.pt for a regular dictionary translation.

If you use Google’s Chrome browser, you can set it so that whenever you open a webpage that’s in Portuguese (or any language), a little bar pops up automatically and offers to translate the page into English. The Google Toolbar extension for Firefox and Internet Explorer will do the same. Or you can just copy-paste the page’s address into Google Translate’s text box.

Once the page has been translated, hovering your mouse pointer over a paragraph will show a popup with the same paragraph in the original language. This can be a great way to rapidly compare the Portuguese version of a text with the English translation.

Translate on the go

There is also a free Google Translate app for both iPhone and Droid that is very good. As long as you have an internet connection, it’s much faster and more useful than carrying around a pocket dictionary.

Porto Editora also produces an excellent Dicionário de Inglês-Português iPhone app that has hundreds of thousands of entries, high quality translations, and plenty of example sentences. The only downside is that it requires an internet connection.

If you’re headed to Brazil where you probably won’t have an internet connection while out and about, you can download an offline dictionary app like the Ultralingua Portuguese-English Dictionary. At $19.99, I think it’s overpriced and the translations are pretty mediocre, but I’ve yet to find anything better.

Don’t forget that we can also use Google’s regular search engine to answer grammar and usage questions, like finding out which of two similar words is more commonly used. For example, since both mandar and enviar mean “to send”, you might wonder whether to tell someone Vou te mandar um email or Vou te enviar um email (“I’ll send you an email”). Running a search on both phrases, we can compare the number of hits:

The results suggest that both verbs are used in this context, but that mandar is the more common choice.

We could run a similar set of searches if we’re wondering what preposition to use with, say, parecer.

To make sure you get the most accurate results, it helps to go to your Google search settings (click the gear in the upper right corner of the search page) and under Search Language, select Portuguese as well as your native language.

Another resource for these types of questions is the online Corpus do Português, which is a huge collection of documents in Portuguese that can be searched to find correlations between words. There’s a bit of a learning curve to using it, but once you figure it out, it’s much more powerful than running a Google search. See the page on Using an Online Corpus to Study More Efficiently.

One Response to Using Google Translate for language learning