This is James. He lives in Brazil and makes awesome videos for portuguese learners like me. You should be jealous of James, because he gets to live in Rio and follow brazilians around the city with a camera for a living.

What James does is simple: Take a bunch of talented brazilian actors, add some stories of everyday cariocas going about their lives, set it all on location in gorgeous Rio de Janeiro, then capture the colloquial language as it’s actually spoken in Rio. The result is Semántica, a Portuguese language program that is Brazilian to the core.

Semántica’s first video series was instrumental in helping me learn Portuguese back when I was a beginner, so when I created Hacking Portuguese, I highlighted them as one of the best ways to ease into learning this beautiful language. Since then, they’ve been producing um monte of new content, and James was kind enough to let me try out the new website which features their entire catalog of video lessons. In addition, he’s offering 15% off for Hacking Portuguese readers with the coupon code “hacking-portuguese“. Thanks James!

So I have tried a lot of online portuguese courses over the years. What makes Semántica stand out is their brasilidade. So many language programs offer portuguese as one of many languages, and tend to use a cookie cutter approach that teaches all languages in the same way, devoid of cultural context. I recall one site that teaches you the Portuguese word for “marmelade” — a food that is probably impossible to find in Brazil. I guess they were thinking that british tourists would want to know how to order it. Of course, what most people who visit Brazil want to know is how to do brazilian things in a brazilian way. And the best way to do that is to watch brazilians doing it themselves.

Series 2 is Semantica’s new offering for intermediate speakers, and it represents a truly ambitious series of 100 videos. The videos tell the story of Bianca, a working-class young woman who becomes bored with her life in a small city and decides to move to Rio. 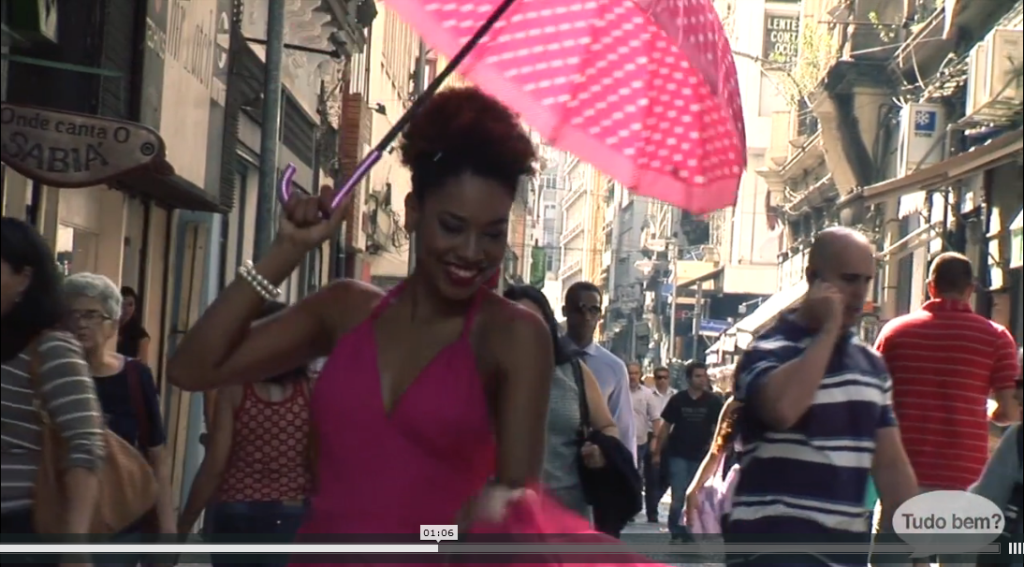 Semántica gives you something that few other courses do, which is real local Rio flavor. James hires local actors and shoots on location in Rio de Janeiro. Thanks to the talents of these actors, the language feels spontaneous, and it has not been sanitized for educational purposes — it’s all there in its messy, beautiful glory. Neither has Rio been sanitized; the story takes us to some of the usual tourist landmarks, but also to places and neighborhoods that would be more familiar to average cariocas. The result is a documentary of life in Rio through the eyes of its residents. There is as much cultural education here as there is language education.

Semantica highlights the colloquial form of the language as it is spoken in Rio. Much of the charm of the videos comes in the small, unscripted moments where we get a glimpse into how brazilians express a range of emotions. We see Bianca cursing at traffic (Droga, vai cara!), arguing with her mother, quitting her job, flirting with guys, and basically doing normal everyday things.

Semantica’s format of  Story + Breakdown is one that I like a lot. The breakdown is like a post-game analysis where an american speaker and a brasilian speaker review the dialogue, with the american noticing interesting or unexpected things and querying the brazilian about them. This format was probably first used effectively for portuguese by the BrazilPod folks, and James’ decision to employ a similar format for Intensivo adds a great deal to the teaching power of the filmed story. The two hosts have a cute (occasionally awkwardly so) energy, and they are fun to watch.

Yet I wish the hosts were more knowledgeable about the language and astute in noticing what’s going on linguistically. There is much that is overlooked. In Lesson 10, a beautiful example of the future subjunctive slips by without comment. In Lesson 9, the hosts pick up on Bianca’s boss saying ‘teu uniforme‘ (as opposed to seu), and this leads to a discussion about tu vs. você forms. But they gloss over the fact that it is the social relationship of boss->employee (and also older person -> younger person) which allows teu to be acceptable here. Bianca would probably not use teu herself when speaking to a superior.

Elsewhere, the videos show brazilians doing some very interesting things: failing to use the imperative mood, conjugating verbs improperly, omitting object pronouns and clipping their words. For the astute viewer, there is much to be learned in the ‘wrong’ version of portuguese presented here. Some students might complain about this, but I actually appreciate seeing the language in its natural habitat. And while the hosts comment on some of this, it might be nice to have more commentary along the lines of “you might have learned that technically you’re supposed to say Eu os vejo, but here she just says Vejo because it’s totally okay to just drop the pronouns if it’s clear what you’re talking about.”

In my experience, Semántica works best the more you re-watch the videos. I found myself watching the videos 1 or 2 times with no captions just to see how much I could understand, and then turning the Portuguese captions on and watching again to catch any bits that I missed. I also kept Anki open so I could record any new words I learned — I now have a whole deck of new words to study. I can say from experience that watching Semantica’s advanced videos many times (>5) over the course of a few months left me with many words, expressions and phrases in my long-term memory, easily recalled even after three years.

Each video has a comment thread, which constitute a whole resource in and of themselves. From what I’ve seen, the Semántica staff have been pretty good about answering questions about grammar and usage and comments about the videos.

Ultimately, what Semántica comes down to for me is just having a vast archive of material where you can watch how native brazilians use portuguese in their everyday interactions. If you pay close attention to the videos and rewatch them several times, you will learn an immense amount, regardless of your skill level.

All three series — beginner, intermediate, and advanced — are now offered on a subscription basis. Check them out, and don’t forget to get your 15% off with the “hacking-portuguese” coupon code.

This entry was posted in Reviews, Things to watch/listen to. Bookmark the permalink.